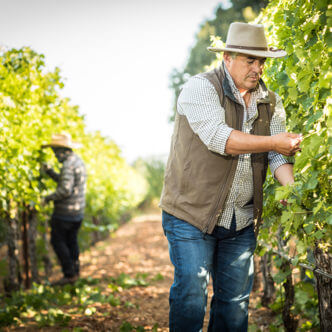 Blame my Berkeley origins, but the immediate imagery I associate with the phrase “farm-to-table” is Alice Waters in a purple garlic flower crown ladling soup at 1970s Chez Panisse. But for many people around the world, farm-to-table is not a social movement or a trend, and it definitely is not something they learned about in a restaurant. It’s a way of life, and often the phrase describes their daily means of survival.

Here in Northern California, our understanding of farm-to-table is made richer by the various experiences layered upon the phrase, often by people who came here from around the world to fuel and better the food industry here. In this piece I asked three immigrants to our area about their relationship to farming and food, beginning in their home countries and evolving to the present. I started with the question: What does “farm-to-table” mean to you?

Rolando Herrera’s family first immigrated to the U.S. when he was 8 years old. Five years later they returned to Mexico. Herrera, wanting to pursue his education, decided to come back to the Napa Valley on his own at age 15, putting himself through school while working at night and during the summers. While hammering rocks for a masonry wall at Stag’s Leap Winery, his work ethic caught the attention of owner Warren Winiarski. His first day working in wine operations at Stag’s Leap was the first day of his senior year of high school, and he remembers immediately being hooked by the aromas of wine and oak. He worked his way up in the industry, and in 1997 opened Mi Sueño Winery. (He also got married that year.) Herrera also has his own vineyard management company, owns 40 acres of vineyards and makes wine for other boutique brands. Mi Sueño translates to “my dream.” I interviewed him at the winery and warehouse in an industrial park in Napa.

“I was born and raised in Michoacan, in a small village named El Llano, which prior to becoming a village was a hacienda. It’s a very humble, poor town.

“My grandmother from my mom’s side, she was an entrepreneur. I didn’t discover that until about four years ago, which now helps me answer some of the questions about where my business sense comes from. She would sell kerosene, handmade tortillas, pots and pottery. She was just doing whatever she could. My grandfather had two donkeys and he would go to the hills and bring two or three loads of wood to sell, but one was always for my grandma—back then you cooked everything with fire.

“So, this was humble, hard work, living one day at a time. There were times in the winter where I remember complaining as a kid of being tired of eating so many potatoes and onions. There were days when it was just potatoes with salt and lemon for lunch. You know in Mexico we eat everything with salt and lemon, right? Those were the sad parts that I remember, but I really appreciate them because I think they shaped where I am today. But when the times were good, food is such a big part of the culture, we always had lunch and dinner together. A big day was on Sunday; that’s when you would have a stew with chicken or beef or a slice of carne asada. It was humble, but there was always food.

“I would say I was born and raised in the fields, seeing my grandparents harvest their corn.

I would hate going to the ecuaros—more walking in the mountains, more weeds to pull, more rocks to go through. [Ecuaro means “hillside plot” in the indigenous language Purépecha]. I would say, ‘Grandma, why do we have to go so far to plant corn and pumpkins here when you have your land?’ And she would say, ‘Mijo, the land we have down there, that’s for us to plant our crops to sell, so we can live off that for the rest of the year. This ecuaro, we plant stuff here for us to eat and this is better, there’s the hillside, and the wind and the sun and soil.’ I thought she was just making things up. And she wasn’t, you know?

“Those lessons in life early on, I can’t tell you how much they’ve helped me feel comfortable and embrace the wine industry. It’s made me feel at home and that’s what’s given me the comfort, the courage, the trust in myself to be who I am today, to start a vineyard management company without ever doing it before, plant vineyards without ever doing it before, grow my own vines without any experience, because I feel at home. I remember hearing consultants from Australia and Europe come here to talk a lot about the sun and the air and the soil and I remember to saying to myself, ‘Wow! Really? These guys make all this money? My grandma taught me that a long time ago.’ Just applying that knowledge and my passion and intuition has allowed me to own my own vineyards and company. I’m really lucky and very proud and thankful to my grandparents for dragging me to those fields.”