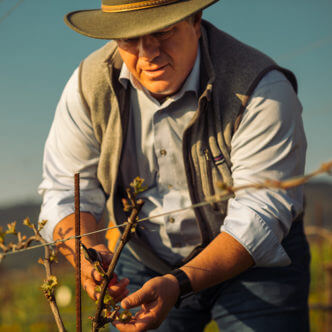 From teen immigrant to vintner, Rolando Herrera has bottled his dream

Rolando Herrera runs Mi Sueño Winery in Napa Valley, which annually produces about 8,000 to 10,000 cases of premium estate Chardonnay, Pinot Noir, Syrah, Cabernet Sauvignon, Malbec, Petit Verdot and a specialty blend. The family-run operation, Spanish for “My Dream,” has 16 full-time employees and 40 acres of vineyards — with another 23 planned.

The bottom of the barrel

Herrera was a high school senior on a summer construction job — making big rocks into small ones for some guy renovating a house overlooking vineyards.

He knew nothing about the homeowner, Warren Winiarski, and had no idea what those grapes meant. The founder of Stag’s Leap Wine Cellars, Winiarski had upended the viticultural world when the Cabernet Sauvignon he crafted from his 1973 grapes bested the French Bourdeauxs in the now famous 1976 Judgment of Paris blind tasting. Napa would never be the same.

Taken by Herrera’s work ethic, Winiarski offered him a job during the upcoming harvest.

“I didn’t even know what a grape harvest was,” said Herrera, who recently turned 50. “It sounded pretty cool.”

“Cool” turned out to be an endless cycle of washing tanks, barrels and machinery — “which I loved,” Herrera said. “Every minute of it. I just loved being surrounded by the tanks and the barrels and the smell, the atmosphere.”

You want to do that, you can

Herrera’s father had brought the family to Napa in 1975, when Herrera was 8. But he moved the family back to Michoacan just five years later.

Herrera was determined to come back. When he turned 15, he announced that he was leaving for Napa to get his high school degree.

“My dad said, ‘Sure. You’re old enough.… You want to do that, you can.’ I packed up my bags and headed back up to Napa Valley, enrolled myself in high school and got my first job at Auberge du Soleil, washing dishes, back in 1982.”
After his first harvest at Stag’s Leap, Herrera was hooked. He worked his way through Napa Valley College, then took every crash course in viticulture offered by UC Davis. After three years, Winiarski promoted him to cellar master, executing the orders of the iconoclastic and detail-obsessed winemaker.

Once again, on his own

By 1995, Herrera was dreaming bigger.

“I pretty much reached the ceiling,“ he said. “I wanted to be closer to the winemaking and to the final decisions.”

Casting around for a winery that would let him do a bit of everything, Herrera found Chateau Potelle, an old-school European winery run by Marketta and Jean-Noel Fourmeaux.

“There’s a great saying: Be careful what you ask for, because you will find it,” Herrera said. “It was great working with Marketta and Jean-Noel, but man, it was an old winery.… I never used so much duct tape in my life to keep parts together.”

For French winemakers, it’s all about terroir, the characteristics of soil, water and sun that give grapes a unique signature. That concept sounded familiar to Herrera.

Back home in El Llano, Michoacan, Herrera’s grandparents would take him to their mountain property on weekends so that he could pull weeds and move rocks on a small plot where they grew food for the family. Why can’t we just eat what we grow down on the farm, he recalled asking.

“I remember her clearly, saying: ‘This is better here, because it’s the mountain; it’s fresher, it’s cleaner — the air, the sun.’ I thought she was just making stuff up. When I heard Marketta and Jean-Noel talking about their land and Mt. Veeder, the plots, and why this block was better, and why this block was more challenging — I felt like I was at home. I felt like I already knew that.”

Herrera embraced Chateau Potelle as if it were his own. “When I left there, after three years, I felt like — you know when you accomplish something, you feel like King Kong? I was ready to embrace any vineyard, to set foot in any winery and be very confident in making wine.”

1997 proved to be a great vintage for Herrera, personally and professionally. He married his longtime sweetheart, bought his first grapes and became a winemaker.

“I bought my first four tons of Chardonnay, crushed them, and boy, I had a blast with my own grapes,” Herrera said. “I ended up with 18 barrels and every barrel was a different wine and a different experiment. I felt like a little kid in a candy store, just trying all kinds of different things and ideas.”

In the beginning, Mi Sueño teetered on nightmare.

“The first years I had to literally call on friends and beg: Please, I’ll pay you, but I only have four tons. I’ll do all the work. I’ll pay you full price for everything and I’ll stay out of the way.”

Herrera took a job as winemaker with Vine Cliff Winery, which let him work on his own wine on the side. But when he moved on to work for Paul Hobbs, he was back to begging. He rented a 4,000-square-foot warehouse even though Mi Sueño was a 50-barrel dream that wasn’t likely to make the rent.

Herrera slowly branched into consulting, picking up new clients and some vineyard acreage even as he improvised and held together his own operation.

In 2006, Herrera bought his own warehouse, now his company’s headquarters. He has six children of his own — “five princesses and one champ,” he said. All have worked in the winery and vineyards, the littlest mostly just watching what “papa” does, and slapping stickers on cases.

The rest of Herrera’s family eventually came back to Napa from Mexico, and Herrera helped several of his siblings get through high school without having to work. Two brothers are now in the wine business as well.

Herrera looks back at his reluctant move from Napa to Mexico as a hard but important lesson in life and winemaking. Uprooting vines and replanting is part of the cycle of the vineyard. Knowing when to uproot for something new was crucial to making an idle dream into Mi Sueño.