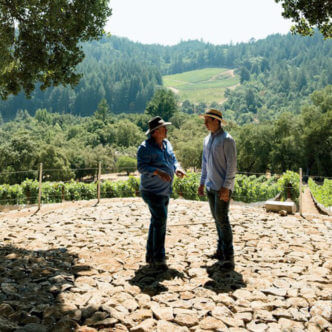 Home for the Holidays at a Napa Valley Winery

Rolando Herrera is an American success story, from his days of washing dishes as  a teenager to running his own acclaimed Napa Valley winery, Mi Sueño. When the holidays hit, it’s all about family—and his wife Lorena’s amazing homemade tamales.

December means tamale time in Napa Valley, at least at winemaker Rolando Herrera’s house. And everyone in this family of eight gets involved in the preparations.

“With tamales, the dough has to be moist and light,” his wife, Lorena, counsels their daughters Perla, 11, and Valeria, a year younger. “It should feel sort of like Play-Doh.”

The girls studiously form the masa into short cylinders around a filling of braised pork seasoned with an ancho, pasilla and guajillo chile salsa. Wrapped in softened corn husks, the tamales—eventually several dozen, as the afternoon progresses— are then ready for the steamer. They will be the centerpiece  of the Herreras’ holiday dinner, featuring an array of dishes whose recipes have been passed down through Lorena’s family. The gathering is not only a celebration of the season but also of the Herreras’ life together in Napa, where for  the past two decades they have been the owners of Mi Sueño Winery, with Rolando serving as winemaker, vineyard manager and overall person-in-charge.

Mi Sueño translates as my dream. Those words can have  a funny ring when it comes to Napa Valley, especially when used in a press release announcing some tech-sector or hedge-fund hotshot’s decision to follow his dream and buy  a winery and/or vineyard. Such aspirations are decidedly easier when you’ve got a spare $40 million or so. But Rolando Herrera’s dream was different. He first came to the US from Mexico in 1975, when his father got a job at a vine nursery in St. Helena, and lived in Napa Valley until the age of 13. Then, when his father decided to retire, the family moved back  to El Llano in the state of Michoacán, population 980 or so. But after two years in Mexico, Herrera decided that whatever his future was, it sure as heck wasn’t in El Llano. So at age  15 he packed up his bags and returned to Napa Valley.

Living in a one-bedroom apartment with 17 relatives and acquaintances, he rose every day at 6:30 a.m. for school. When school let out at 2:30 p.m., he’d head over to his job  as a dishwasher at Auberge du Soleil, the iconic Napa Valley luxury resort, and work until midnight. The next day he’d do it again. Weekends? Work, too. “But that was fine,” Herrera says, with his customary good humor. “I just needed to  make sure no one was using my sleeping bag! And, you know, living like that is an adventure when you’re 15.”

After a few years of restaurant experience, Herrera shifted  to vineyard work. His stroke of luck came one day when  the foreman of the crew he was on said he needed a few volunteers to help out at Stag’s Leap Wine Cellars.

“I was like, Finally! I get to see what a winery is like,” Herrera says and laughs. “Wrong! We got there and the foreman said, ‘OK, you guys, you see all those rocks over there? Break ’em up. We need to build a wall with them.’” That wall, though, was being built for Warren Winiarski, Stag’s Leap’s founder and a legendary name in Napa Valley wine. Winiarski took note of the teenage rock-breaker with the boundless energy and formidable work ethic. Herrera says, “End of summer,  I had to go back to school, but Warren offered me a job at the winery. I told him I’d love to, but I needed a job from 3 p.m.  to midnight, so I couldn’t accept. And Warren said, ‘Rolando, it’s harvest. We’ve got people working here all night.’”

Herrera took the job. “I was just a cellar rat, but I loved it. That first day I walked into the winery, seeing the tanks, the barrels—I got goosebumps. It was like walking into another world. That was 32 years ago, and it still feels like yesterday.”

Within a few years Herrera was promoted to cellar master  at Stag’s Leap; from there he moved to stints as winemaker  for Chateau Potelle, Vine Cliff and finally Paul Hobbs Winery, before taking the leap to concentrate full time on Mi Sueño. Today Herrera farms 40 acres of Napa Valley estate vineyards for his excellent Cabernets, Pinot Noirs, Syrahs and Chardonnays, and oversees other vineyards for clients through his Herrera Vineyard Management company. He has 60 full-time employees (with retirement plans and full benefits,  a rarity for vineyard workers) and is one of the most successful members of a growing group of winemakers and winery owners who are changing perceptions of the roles Mexican immigrants play in the wine business and in Napa Valley.

“Look, trying to succeed as a winemaker here, there’s a lot of competition, a lot of talent—it’s like trying to win the Indianapolis 500,” Herrera says. “I don’t see it getting any easier, but I think you’ll see more Latino winemakers throughout the years, more Latino vintners—especially now that the second generation here is able to capitalize on their parents’ skills and connections.” He throws out some current names, including Elias Fernandez at Shafer, Ulises Valdez (“I crushed his first grapes for him back in 2002 at  Mi Sueño”), the Renteria family, the Robledos (his in-laws), the Ceja family and Hugo Maldonado, whom Herrera describes as “a really good young winemaker.” But he also notes that breaking into the wine business in Napa is incredibly tough, whatever your background happens to be. As Herrera puts it, “You have to be really good, really smart,  really lucky and really hardworking.”

Herrera is all those things, maybe the last most of all. But no matter how hard he works he always reserves time for the one thing he’s even more passionate about than wine, which is family.  So as this sunny December day slowly shifts toward evening, the kids—Perla and Valeria, plus Rebecca, Esmeralda,  Victoria and Rolando, Jr., occupy themselves playing bocce, the de facto official sport of the Napa wine world. Meanwhile, Lorena gets the rest of dinner ready: crisp chiles rellenos  filled with rice and Cotija cheese (“My mother came up with these,” she says); a salad of colorful, crunchy radish and avocado; fluffy Spanish rice; and creamy cranberry beans topped with chopped fresh cilantro.

Soon, at a table outdoors, Lorena and Rolando are enjoying glasses of Mi Sueño’s velvety 2013 Napa Valley Cabernet, as empty corn husks pile up on a platter and homemade salsa gets passed around. Everyone talks—about family and the future, wine and food, sports, holiday plans and school (Rolando, Jr., who’s 18, plans to get a degree in enology, while Rebecca, the oldest, is already in college). Plates are passed, there’s laughter and, as the last bites of cinnamon-dusted tres leches cake  are enjoyed, an air of contentedness swirls around the Herreras. They may have taken a tougher road to achieving their dreams, but it’s also been an extraordinarily rewarding one.

Herrera launched  Mi Sueño with the 1997 vintage of this wine.  He still uses fruit from  the same appellation for it, producing a Chardonnay that’s supple and full of ripe tree-fruit flavors.

Lorena isn’t the only cook in the family. When Rolando grills lamb chops during the warmer months, he likes to pour guests this ink-dark, spicy Syrah.

Herrera’s focus is on Napa Valley, but for this fragrant, black cherry–rich red, he uses grapes from the Russian River Valley, Sonoma County’s most famous Pinot Noir region.

The flagship wine of the estate, this structured, blackberry-inflected Cabernet comes from  a blend of Coombsville and Oak Knoll vineyard sites.

Herrera names his  top wines—including this complex, ageworthy Cabernet Sauvignon—after his children (Rebecca, 19, is his oldest daughter). Quantities  of these wines are small,  and they can only be purchased directly from the winery.