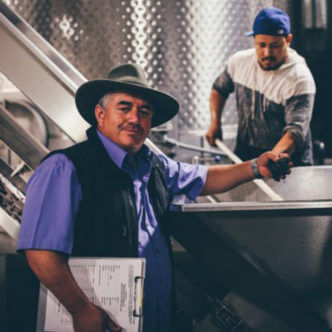 How a Boutique Wine Producer is Meeting Labor Challenges Head On

“No green flavor,” Rolando Herrera says, tasting a bunch of grapes from the latest pallet of Pinot Noir fruit to arrive here at his boutique winery in Napa Valley. He’s relieved, but the relief isn’t evident on his face, which instead bears the studious expression of a professor as he grabs another bunch straight from the de-stemmer.

The grapes weren’t supposed to come in from the vineyards for at least another week, but weather can be unpredictable. A record-setting heat wave that hit the valley forced Herrera’s hand, pushing the start of harvest up a week—straight into the end of bottling season.

“It’s kind of a winemaker’s nightmare to have to harvest while you’re bottling,” he says. These days, Herrera, the owner of the 20-year-old Mi Sueño Winery, is visiting his vineyards two or three days each week to monitor canopy health and irrigation, making sure that his vines stay in top condition and that he can get his Chardonnay and Pinot Noir grapes back to the winery as soon as they’re ready. Then he can get back to bottling his 2015 El Llano red blend.

Herrera has a remarkable story—and it has shaped every aspect of his business. At 15, he immigrated from El Llano, Mexico, to the Napa Valley, where he got his start in the business as a dishwasher at Auberge du Soleil. Shortly after, he gained an appreciation for grapes while working as a harvest laborer at Stag’s Leap Wine Cellars, where he eventually became the cellar master. His ascent over the course of three decades to the top of the industry—his wine has been served at the White House—is encapsulated in the name of his business, which is Spanish for “my dream.”

Herrera’s rise through the wine world helped inform the philosophy that he now instills in his staff; it combines a deep appreciation for every step of winemaking with a belief in every employee’s potential, regardless of experience. He has 16 full-time employees who work both in the winery and in the vineyards, and he encourages their growth with the same zeal he once applied to his own career, making sure that each of them becomes educated in all aspects of the business, from the vineyards to the cellar to the barrel room.

“I’m always looking for younger people with talent and ambition, to give them an opportunity like I was given an opportunity,” Herrera says. Often, he adds, ambitious employees will surprise him by taking on—and excelling at—jobs he didn’t know they were ready for, such as setting up the bottling line.

Yannick Girardo, Mi Sueño’s general manager, says Herrera’s story inspires many of those who seek work at the winery, helping it draw in top talent. “It’s the story,” he says. “To be a small, luxury boutique winery—it’s a niche where people need to want to be part of this experience, and to grow, and who knows—maybe [eventually] have their own winery.”

And at a time when vineyards across California are facing labor shortages that can leave key positions unfilled when they’re needed most, Herrera has been able to attract quality employees and keep the turnover rates at his company low. He has accomplished this with two main strategies. First, he hires top-notch talent from his vineyards to work in the winery after harvest. Keeping them on board in another capacity helps ensure that he doesn’t lose his best vineyard workers during the slow season. Now that the labor-intensive harvest season is winding down, three of Herrera’s full-time employees are making the switch. And second, he demonstrates to his employees that however high his standards may be for them, he holds himself to the same standards. The result, he says, is loyal and diligent employees.

“A lot of my workers have been here a long time,” Herrera says, “and they started pruning, they started pulling weeds, they started washing barrels. And now they’re helping me supervise and manage parts of the business.”

One employee, Ernesto Mezcua, for instance, started out as a vineyard worker nine years ago and is now one of the key managers of the winery, supervising both the cellar and the vineyards. He says his work in the vineyards has given him the ability to identify different qualities in the fruit once it’s harvested, an asset in his new role. “I can understand the vines from the moment they’re providing grapes,” he says, speaking in Spanish translated by Herrera.

Herrera says that he trains workers who only have experience in the vineyard to work in the winery by slowly increasing the amount of time that they spend in the winery and by assigning them more duties around the cellar. The basics mostly consist of cleaning and sanitation, tasks that Herrera says make up the bulk of the work done at a winery overall.

Quick to point out that he had no experience when he first started in the industry, Herrera says he cares more about work ethic than he does about experience. “I tell my guys, Listen, I can teach you how to prune, how to drive a tractor, how to sucker—everything that needs to be taught about the vineyard and the cellar,” he says. “What I can’t teach—I won’t even try—I can’t teach you to be punctual, responsible, accountable, faithful, or loyal.”

Of course, Herrera also knows that loyalty comes from giving his employees a fair shake. Recently, he boosted pay and benefits for all his employees, a step made more important by the continuously increasing cost of living in Napa Valley.

“The increase in the cost of living has definitely been playing against everyone,” says general manager Girardo.

Herrera put together a program for all his vineyard and cellar workers that not only increased pay but provided full benefits, including vacation, paid holidays, and a 401(k) plan. It was a huge investment, he says, but it paid off: This year was the first year since the business started that he has not had any turnover.

“If my vineyard workers were to leave,” Herrera says, “I could not run my business without them. So I think it’s important that we share some of our success and our wealth with them.”

Herrera embraces the opportunity to make such an investment, saying he’s glad the labor shortage has raised wages for farmworkers. But he notes that it takes more than money to retain the most talented employees.