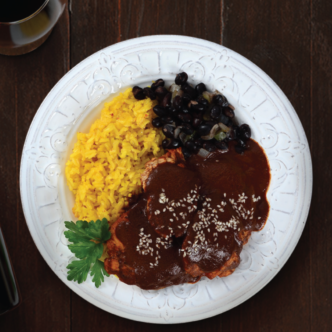 Heat your oven to 400ºF and roast the tomato and onion on a baking sheet for 20 minutes or until browned. When cooked, reserve them in a large bowl.

Heat ½ cup of the grapeseed oil in a large skillet over medium heat and toast the peppers, a few at a time so you do not overcrowd the pan, until fragrant. Place the toasted peppers in a bowl with hot water to soak for 30 minutes to rehydrate.

Remove the peppers from the water and place them in a blender with 1 cup of chicken broth and puree until smooth and then add to a sauce pot.

Puree the other ingredients in the bowl with an additional cup of chicken broth, orange juice, and chocolate- be sure to remove the cinnamon stick as it will not blend. You may need to do this in batches if your blender is not big enough. Add the puree to the pot with the pepper puree and simmer for 30 minutes. Taste the sauce and season with salt.

Heat ½ cup of the grapeseed oil in a large skillet over high heat. When the oil is hot, add the chicken breast and cook on each side until brown – about 5 minutes. Once browned, add the mole sauce to the skillet and simmer until the chicken is cooked – about 30 minutes. Serve with Spanish rice and warm tortillas on the side.