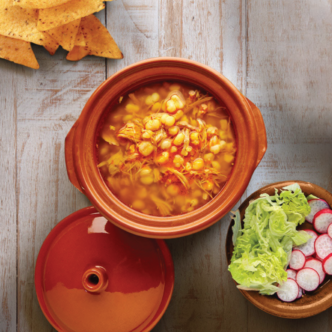 We recommend pouring a glass of our 2018 Los Carneros Chardonnay to have with this Pork Pozole.  The mouthwatering notes of tropical fruit and bright acidity will bring out herbaceous and savory pork.

Heat a large pot or Dutch oven over high heat. Toast the peppers, a few at a time so you do not overcrowd the pan, until fragrant. Place the toasted peppers in a bowl with 3 cups of hot water and soak for 30 minutes to rehydrate. Puree the peppers with their liquid and garlic in a blender until smooth. Strain the puree to remove the seeds and then set aside.

Heat the grapeseed oil in the pot over high heat. Season the pork to taste with salt and pepper. When the oil is hot, add the pork in batches and sear until golden brown. As each batch of pork browns, remove and place in a bowl. Once all the pork is browned, drain the oil from the pot and then add all the pork back to the pot with 10 cups of water, the pepper puree, bay leaves, and oregano. Bring the pot to a simmer and then cook until the pork is tender- about 2 hours. Add the drained hominy and cook for another hour or until the pork falls apart when tested with a fork. Remove the bay leaves from the pot and serve in a large bowl. Place the onion, cabbage, radish, and limes on a plate and serve on the side with a bowl of tortilla chips.