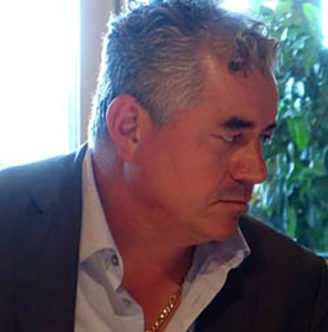 From dishwasher to director of winemaking, from sneaking across the Mexican border to having his wine served in the White House, Rolando Herrera has made the American dream happen. And last week he brought his career full circle.

Herrera held a posh dinner party at Auberge du Soleil in Napa Valley on Saturday to celebrate the 20th anniversary of his wine label, Mi Sueño. Auberge du Soleil is where Herrera worked as a dishwasher in the 1980s as a teenager while he finished high school.

“I wasn’t just a dishwasher,” Herrera told the invited crowd of more than 100 longtime customers, friends and family. “I was a great dishwasher.”

Mi Sueño now makes about 8000 cases a year of expensive wine (recommended: two single-vineyard Cabernets from Coombsville, named after two of his kids, Rebecca and Rolando Jr.). It’s a favorite wine of many Major League Baseball players and has been the chosen brand on the private planes of at least four MLB teams. Mi Sueño (“my dream”) is the kind of successful winery that many people try to establish in Napa Valley with wealth either inherited or earned in other professions.

Herrera got on his path to success with dishwashing, stone cutting, and a very crucial facial expression: The Look. He and Stag’s Leap Wine Cellars founder Warren Winiarski recalled that look on Saturday.

First, the setup. Herrera’s parents first brought him over the border to California in 1975, when he was eight years old. They stayed for five years but went home. A couple years later, he and his brother decided to go back to Napa Valley on their own. They lived in a plant nursery and found odd jobs where they could before he got the dishwashing gig. He did other jobs on the side.

In 1985, Winiarski hired a local contractor to break up some rocks on his property so he could build a wall. The contractor hired Herrera for day labor. The men were down in a pit when Winiarski walked above to check out the work.

“My boss said, ‘Don’t look, here comes The Señor’,” Herrera recalled. “But I wanted to see him. I came from a very humble village in Mexico. People don’t meet your eyes. But I had been in America for five years. I had American culture.”

“Rolando was hired, but I didn’t hire him,” Winiarski said. “He was making small stones out of big stones with a chisel. He looked up at me. I looked down at him. There was something in his eyes that said, ‘I am not a stonecutter’.”

“I saw that look,” Winiarski continued, holding a mic while Herrera’s wife and six kids beamed in approval. “And I knew that look. I started in the wine industry as an apprentice. I was in a two-man winery and I was #2. I didn’t want to be #2. I saw that and I said, there is something of me in that look. I said to the winemaker: ‘Let’s hire Rolando for this harvest.’ And we did.”

Herrera soon became a cellar rat at Stag’s Leap and spent 10 years there, eventually becoming cellar master. He moved up to assistant winemaker at Chateau Potelle, winemaker at Vine Cliff and director of winemaking at Paul Hobbs Wines. And he went to church, which turned out to be important because that’s where he met 14-year-old Lorena Robledo.

Lorena’s parents also came to California as migrant workers. Her father moved from field worker to vineyard manager, and also had the foresight to buy vineyards when they came available.

“My father was really strict,” Lorena told Wine-Searcher. “We were just good friends for 10 years.”

In 1997, Rolando and Lorena finally married. Lorena’s father Reynaldo Robledo had started his own vineyard management company (the Robledos now own 350 acres; that’s another sueño-come-true). In the fall of ’97, Herrera bought some Chardonnay grapes from his father-in-law and made 200 cases of wine as a side project. The wine sold out three years in a row, and Herrera knew he was onto something.

In 2001, he came home from working in the vineyards to a phone message from the White House. He had citizenship by then; he was able to get it after a 1986 law offered amnesty for immigrant workers. But still, his first thoughts were suspicion, then paranoia.

“I thought it was a prank,” Herrera said. “I listened to it 50 times. Then I got worried. I told Lorena: ‘Maybe you better not stay here tonight’.”

It turned out that White House sommelier Daniel Shanks wanted to buy some Mi Sueño Chardonnay for a state dinner that President George W. Bush was hosting for Mexican president Vicente Fox.

“Barbara Bush liked it enough to order an extra case for her cellar,” Herrera said.

There were plenty of emotional moments at last week’s Auberge du Soleil anniversary dinner, but the finest was provided when Herrera’s youngest daughter Valeria, age 10, got the mic.

“I just want to thank my mom and my dad for always being there for me,” she said. “And for giving me this life to live.”