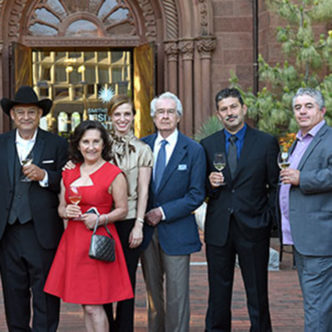 Winiarski himself donated $50,000 to the event and praised the entrepreneurial spirit of the winemakers in attendance, telling Unfiltered, “It’s important that we see these folks have support within the country, and they are able to make the ascent if they have the ability. It was very heartwarming to hear this American dream being realized by each of these families,” he said. “It takes listening, it takes observing, it takes attention, and if you’re doing it merely as a job, it’s not going to work. You have to give it your heart.”

Ceja, who immigrated to the U.S. in 1967 as a child, reflected on the honor. “We started working in the vineyards as children, and now we are making world-class wines,” she told Unfiltered. “For our brand to be showcased in one of the most respected institutions in the world, I nearly had to pinch myself. It shows that my adopted country is still the land of opportunity …. For me, I’m the voice of those unsung heroes, of the invisible workers that contribute so much, because that’s how I started.”

Some of the winemakers stayed in D.C. for a Congressional Wine Caucus event on Capitol Hill the following day, held by California Rep. Mike Thompson and featuring a tasting that included Mi Sueño Winery and Ceja Vineyards. “[Thompson] said that he recognized how this multibillion-dollar industry is thanks to the hard work of so many immigrants,” said Ceja, “and he is so proud that now those same immigrants are changing the landscape of the wine industry.”